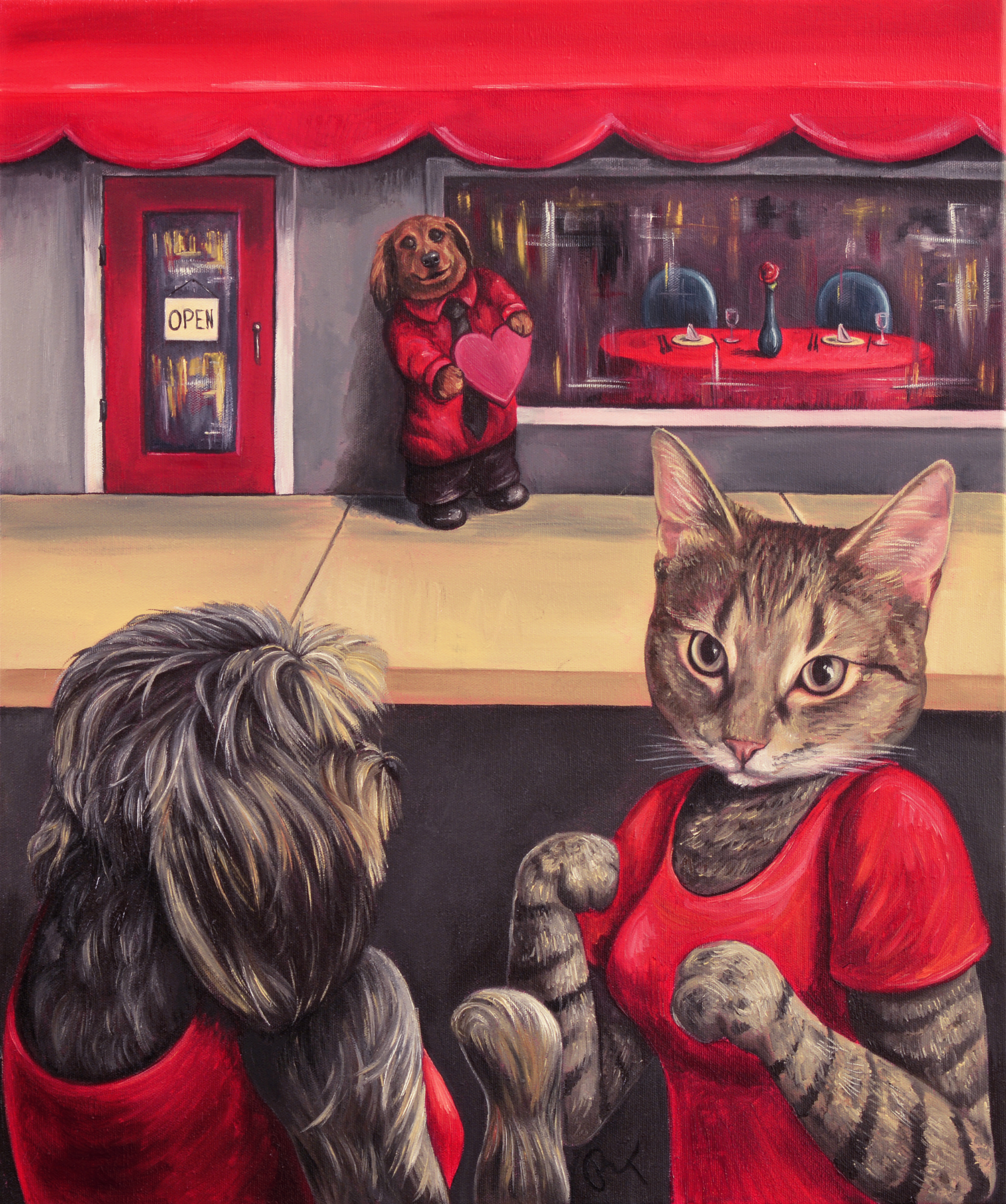 Wilma took one last gaze in the mirror and gave a smile at her reflection. Could this be the day Mr. Mac and Wilma became more than Friends? Wilma had hoped all week this is in fact the day. A week ago, Mr. Mac asked his best feline friend, Wilma, out to dinner. The day they made plans happened to be February 14th, which everyone recognizes to be Valentines Day.

What other reason would Mr. Mac want to meet me for dinner on Valentine's Day? thought Wilma.


Wilma left her house, and drove her tiny red car to town. Her thoughts are crazy thinking of all the possible scenarios for the evening events. She is to meet Mr. Mac at Maggie's Italian Café. Maggie is a dear friend to Mr. Mac and Wilma. Wilma always suspects Mr. Mac has a crush on Maggie, but he never admits the truth out loud. He always has a stupid smirk on his face when encountering the young mutt, Maggie. Plus, Mr. Mac's tail would wag faster for Maggie than anyone else.


After ten minutes of driving, Wilma arrives in the town center. Wilma feels optimistic about the upcoming situation. She parks her car on the right side of Bark Street, which is a block away from the restaurant. As she heads down the sidewalk, she observes Mr. Mac looking dashing across the street in front of Maggie's Italian Café. She begins to cross. As she does, she notices their canine friend, Tessa, crossing as well.

Wilma tried to remain calm, but she knows Tessa wants Mr. Mac, and her presence meant she is up to no good. It crosses Wilma’s mind that she is here to ruin her plans.

"Hmmm...Wilma," snarled Tessa. "What are you doing here?"

"I'm meeting Mr. Mac for dinner. Tessa, what are you doing here?"

Tessa responds, "That is impossible, because tonight I'm eating dinner with Mr. Mac."

Wilma's fur begins to rise at Tessa's words. She tries to hold back her claws.

"Not true... he is here to eat dinner with me," shouted Wilma.

"If you want a fight, I will give you a fight," barked Tessa.

Tessa clenched her fists and raised her arms in a fighting position. Wilma followed this format ready to attack for her man. They circle around the street with their fists up, wondering who would provide the first punch.

"Ladies. Ladies," said Mr. Mac "What is the commotion?"

The ladies pause and stare over at Mr. Mac.

"Mr. Mac, who are you eating dinner with tonight?" said Wilma

"Yeah. I thought it would be nice if we got together for dinner," said Mr. Mac.

Mr. Mac holds a giant heart box of candy in his hand, which makes the situation more confusing for the ladies.

"Umm... why are you holding a heart-shaped box of candy, if you didn't realize it's Valentine's Day?" asked Tessa.

"Maggie saw me outside and gave it to me," said Mr. Mac with an extensive grin and wagging tail.

Wilma and Tessa look at each other, and lower their fists. They know what they are both thinking by the one glance. 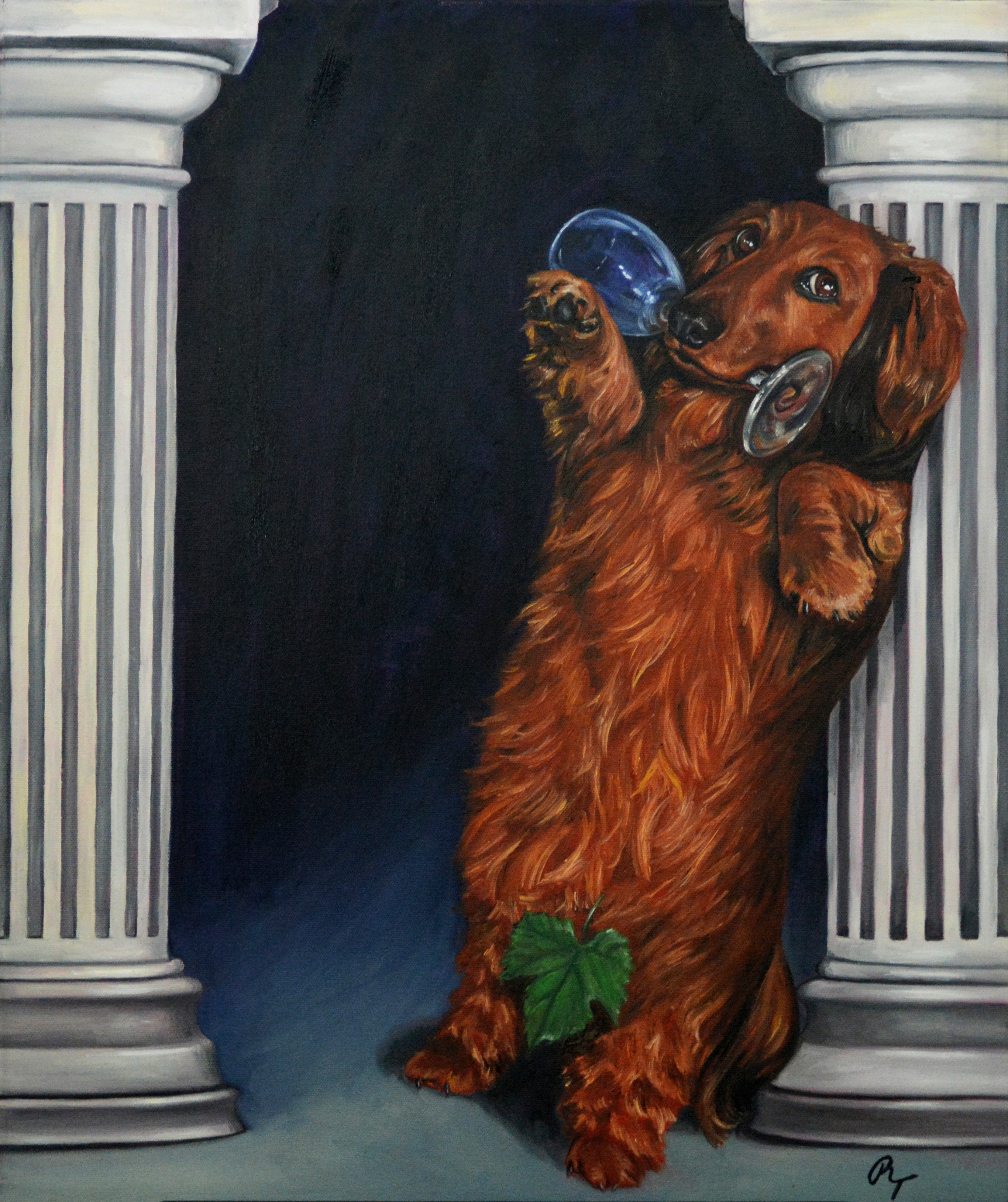 Mr. Mac wakes up naked in a dark forest. His head is throbbing and hairy belly aches in pain.

Unfortunately, no one answers because he is indeed alone. As he rotates his head back and forth to obtain the full view of the forest, he hears sounds in the distance towards his left. The familiar echoes are the voices of his dear friends. Bit by bit his memory comes flowing back.

The night began two hours earlier, by Mr. Mac ringing the doorbell of the massive house belonging to his friend, Tessa. This evening, she holds a small dinner party, and Mr. Mac's excitement is focused on the food she is serving. Since Tessa is a Yorkie, she is known for her exquisite taste, and Mr. Mac realized she would only serve the very best. She greets him at the door with an enormous grin and her tail wagging. Her red dress sparkles while her fancy pearl necklace glistens in the light. His observation of his tiny friend makes him feel under-dressed, because he wears only a plain collared blue shirt with khaki pants. Tessa examines him up and down, but did not seem troubled by his attire. She escorts him to the backyard patio where the rest of the guests are waiting.

Mr. Mac recognizes everyone at the diner party. The first guest he spots is his best friend Wilma. She is angry he is overdue for the party. She loves their friends, but is tiresome of hearing stories from Tessa who likes to list how many things she owns. Wilma believes Tessa's intention is to own Mr. Mac too, and she would never let that crazy Yorkie possess her man.

"Mackers, you are late!" cried Wilma.

"Sorry, Wilma. You know me, I lost track of time as usual."

Mr. Mac scans the area and notices the other attendances waiting to eat. Gwen stands present at the party. She is an older and wise feline he respects highly. Gwen always has the best advice for her younger friends, and most of the time they will in fact follow her guidance. She welcomes him with a giant hug.

"I've missed you, Mr. Mac. It has been months since we have chatted."

Mr. Mac went on to embrace the next guest, which is the young and beautiful mutt, Maggie. His temptation is to show his affection by sniffing her butt, but today's society dictates that is no longer an acceptable greeting.

The last guest is not someone Mr. Mac cares to see. His archenemy Freddy stands frowning in silence. Actually, Freddy is sort of a frenemy, but kind of an evil, feline friend. They hold a long history together, which leaves a significant amount of bitter, unforgettable memories. The two semi-friends eye each other, but smile politely as everyone takes a seat at the patio table.

"I hope everyone loves the meal my chef Mary prepared today," announces Tessa. Tessa's furry servants uncover the food trays to reveal the feast. All of Mr. Mac's favorite dishes lay on the table with an enticing aroma. One servant begins to pour Mr. Mac a glass of red wine.

"Expensive wine and my favorite foods! Tessa you truly outdid yourself tonight." This is the last sentence and moment Mr. Mac recalls of the evening. His next memory is waking up naked in the forest.

Mr. Mac establishes the forest clearly resides in the backyard of Tessa's house. As he walks towards the house, he initiates wondering what exactly happened. He begins to question if he drank too much alcohol, or did someone poison him. Eventually, his thoughts instantly reflect to Freddy.

Freddy poisoned me, hit me over the head, and dragged me out here, thought Mr. Mac. However, he knew Freddy did not dare to be horrible in front of Gwen. Freddy always saw her as his mentor, and would not jeopardize the relationship.

Perhaps it is Gwen who poisoned my drink, came about Mr. Mac's next thought. Gwen seemed annoyed he did not visit her in a while. He use to visit and ask her advice at least once a week, but neglected to do so most recently. It could be Gwen took some feline rage on him tonight. However, this is unlikely since she is a respectable member of society.

Mr. Mac starts to think of the possibilities again. He eliminates Wilma and Maggie right away. He understands Wilma had been irritated this evening due to his unpunctual arrival, but they are best friends who won't hurt each other. In addition, he considers Maggie a cutie and would not pull such trickery.

The final suspect is Tessa. Could Tessa pull off such a hoax? She retains enough servants to help her, and she most likely was upset because I did not dress as elegant as she expected, ponders Mr. Mac.

After five minutes of walking and wondering, Mr. Mac at last arrives at Tessa's porch. He marches up to the table, still naked, to question his friends of the occurrences of the evening.

"Who poisoned me with my wine? Who knocked me out?" he demands.

His friends stare at him in alarm, and he suspects it is the shock of his nakedness. Perhaps he should have considered finding something to cover his hairy body before re-entering the dinner party.

"No one poisoned you or knocked you out," says Gwen.

"Yeah," agrees Wilma "After you ate an enormous volume of food, you started to howl and ran off into the woods. I'm not sure why you are naked. I think you over ate and went crazy!"

No. I must have drank too much wine," said Mr. Mac in disbelief.

"Mr. Mac, you’re a silly dachshund! You didn't even touch your wine," cries out a bothered Tessa.

She then points to where he had been sitting. There is no uncertainty; Mr. Mac did not touch his wine this evening. He approaches the table and reaches for his glass.

"Oh, well," says Mr. Mac "I might as well live in this moment and finish off the excellent wine."

He drinks the wine, and continues being social with his friends who are still in astonishment of the night's events.